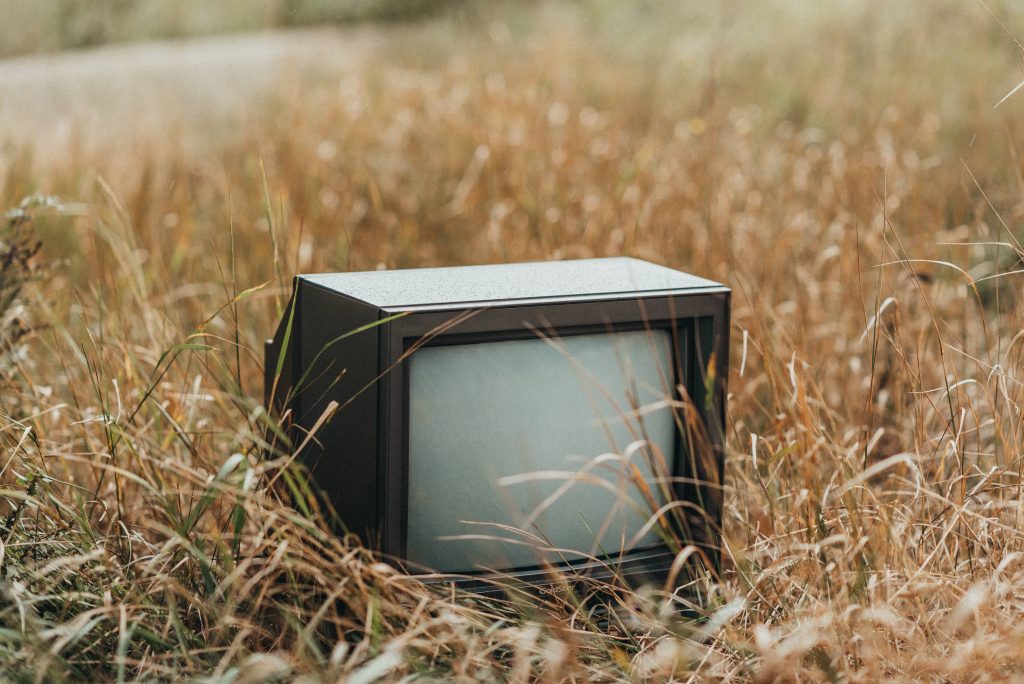 Old TVs can take up a huge amount of space in your home. If they’re big and bulky, you only have so many spots where you can store them. When it comes time to upgrade, you don’t want to waste precious storage space on a defunct TV. You’ll definitely be looking for television disposal options in your area, seeking out someone who takes old TVs. Since you’re desperate to get rid of the junk, you might think there’s nobody who takes old TVs — you don’t want them, so why would anybody else?

Turns out, a lot of people take old TVs. Granted, you’ll have to find the right people, but you should have plenty of options for television disposal. There are some steps you’ll have to take to find those people. We’ll help you with the preliminary ones in this post. First, you’ll need to understand enough about the market for old TVs that you can identify people who might want your reject monitor to actually use. If your TV doesn’t work, though, you’ll have to skip that step and go straight to the more traditional television disposal methods. We’ve got important information about how to do that right (and wrong) toward the end of this post. No matter how you’re going to get rid of your old TV, you’ll need to know what kind of TV it is to accurately assess your options. We’ll help you with that in a later section.

All that said, let’s get started. First, let’s jump into why people want to get rid of old TVs in the first place.

The Problem with CRTs

Why so many people are in search of television disposal shouldn’t be hard to figure out. You can pretty much get the gist of it just from looking at them. A CRT TV is insanely heavy — the bigger ones can weigh as much as 160 pounds. That means they also take up a lot more space in people’s homes. If you have to have a really deep table to put your TV on, that’s going to limit your decorating possibilities. That weight and heft is also going to make it harder to move things around, making them further unappealing.

Plus, this technology is dangerous to produce and properly get rid of. That’s one of the reasons why television disposal services are specialized and you shouldn’t just leave your old TV out at the curb. That danger comes from the components of the CRTs. CRT stands for cathode ray tubes, and those are tricky to handle properly. These sorts of TVs also contain a whole lot of lead, which we know can be dangerous.

With all these problems, it might be hard to imagine finding someone who takes old TVs. Never fear. In addition to television disposal services, there are actually a lot of people who are on the hunt for a specific kind of old TV and would be more than happy to take them off your hands. You might even be able to sell your old TV for a pretty good price if you know who your market is. Let’s get into more specifics on who takes old TVs in the next section.

The Modern Demand for CRTs

So, who are all these people clamoring for the type of TV you’ve had gathering dust in your basement for the past ten years or more? Most of them are nostalgic gamers. Believe it or not, the old CRTs actually have their benefits. Some people who like to play video games from the ‘90s and ‘00s prefer the picture quality of old CRTs to modern screens. Many of them would be distraught to hear that you’re searching for television disposal options for your classic CRT.

If you can find one who takes old TVs, then they’ll be happy to explain the minutiae of why a classic game can only be properly enjoyed on the TV you were set to take to the dump. We’ll endeavor to just get you the basics here. It has to do with how the picture was constructed on these old TVs. There are horizontal lines of resolution all across the screen of a CRT. Most of them have 240 of these lines total. These are created by an electron gun shooting electrodes at the inside of the screen while a piece of metal blocks certain parts. The phosphors that aren’t blocked get lit up a pixel at a time and create the image on the screen.

Since vintage video games were created for this type of resolution, many argue that they look and perform better on a CRT monitor instead of a modern flat screen.

How to Tell if it’s a CRT

All that demand sounds pretty good if you’re looking for someone who takes old TVs. But before you can start advertising your old monitor, you’re going to have to know if it actually is a CRT. There are some pretty easy ways to tell; they’re not exactly subtle.

First, you’re going to want to consider the general size and shape of the TV. CRTs are visually very different from flat screens because of the way they jut out in the back. If the TV is very deep with a lot going on behind the scenes, then it’s likely a CRT.

If you’re still not sure, you can perform a little test. The screens on CRT and modern LCD TVs are pretty different, so take a gentle tap on the screen of your monitor. Was there any give to the screen? Or was the glass completely unforgiving? CRTs have that hard, unyielding glass, whereas the screens of more modern TVs have a bit of bend to them.

Another way to tell is simply by figuring out when you bought the TV. If you got it new after 2010, it’s almost assuredly not a CRT. They were mostly phased out in the mid-’00s. You can still find someone who takes old TVs that aren’t CRTs, but you’ll probably need a television disposal service. There’s not much nostalgia for LCD screens.

If you can’t find a gamer who’s dying to take a CRT off your hands, or if you’ve just got a defunct flatscreen from 2011 or something, then you’re going to need to find a different kind of television disposal service.

Who you can find to take your TV is going to depend on the functionality of your old TV. An electronics recycler is someone who takes old TVs, but you might want to try other options before you get to that point. If your TV still works, there might be a charity or other organization nearby that would benefit from a TV. Think schools, libraries, or other places that might have a use for technology but not much funding for it. There’s always Goodwill, too. You can always call and ask if there’s someone who takes old TVs. Going to an organization before just junking your old television is a great way to make sure that it’s getting all the use it possibly can before you dispose of it.

When donating to an organization that needs a TV isn’t possible, then you should turn to electronics recycling. Check to see what their rules are about recycling CRTs before you load up the car — since they’re so cumbersome and potentially dangerous, electronics recycling centers will often charge a fee to recycle a CRT TV. However, there are also often recycling events that will take CRTs off your hands for free. Inquire with your local electronics recycling facility.

When recycling CRT monitors, the television disposal process is fairly complex. Facilities have to manually take the shell of the TV off in order to expose the cathode ray tubes before they can even think about any other television disposal steps. Then, they can access the tubes, panel glass, electron gun, wiring, and electronic chip boards. They separate each of those components. Separating the different types of materials helps make the recycling process smoother. Each type of material has a different recycling process.

Inside that glass tube is a vacuum seal, which is one of the reasons a recycler who takes old TVs needs to be extra cautious. If they don’t do their job right, the tube might implode. They usually have specialized equipment take the tubes apart to avoid catastrophe. Then, potentially hazardous materials in the tubes, like phosphorus, have to be removed before they can recycle the glass.

Once the recycler who takes old TVs has gotten all that done, the different components are treated pretty much exactly like any other electronic waste. They usually get shredded. Then, all the different metals like iron, steel, aluminum, and copper can get separated out through various methods. Magnets can be an effective tool at this stage. The rest is mostly glass. If it’s leaded, it might go on to make new screens, or the recycler might send it to a smelter so the lead can be used in other applications. Batteries are a popular option. Whatever the next life of your old TV is, all the different elements are refined at another plant and then sold to a manufacturer. So, when you choose recycling, television disposal isn’t really disposal at all. It’s giving the components of your old TV a new life.

Don’t just put them out at the curb.

It’s important to keep old TVs out of landfills because they can contain some dangerous materials. We don’t want all that lead and other chemicals getting into our environment. That’s why it’s important to find someone who takes old TVs and disposes of them properly. If your idea of television disposal starts and ends with the dump, then you need to expand your options.

Check the recycling laws where you live. Some states have more restrictive regulations than others, but lots of places have protections in place to prevent potential toxins from getting into our air and water. That means it might be illegal to put your TV out for the trash — remember all that lead in a CRT? You don’t want that getting out into the environment, whether it’s legal or not, so it’s especially important to make sure you’re disposing of the old equipment responsibly.

We know setting a heavy, unwieldy TV out at the curb seems like the simplest option, but it’s not the best one. We’ve laid out a pretty solid case for several other forms of television disposal, and we hope you’ll at least consider them.

Before you started this piece, you might have thought that your old TV was just junk that nobody in their right mind would take if you paid them. Now, you know there’s a sizable second-hand market out there for CRT TVs. You’ve got the tools to identify that type of television if you come across it, and you know who to look for to take it off your hands. You might even make a little money off it if you play your cards right!

There might also be places in your community that would benefit from an extra TV, even if they’re not the latest technology. We discussed contacting schools, libraries, and similar institutions to see if they’d be interested in getting a new screen, and that’s definitely an option for television disposal that gives the device a new life. You might not get any money, but you’ll get the satisfaction of helping out.

The bottom line is, finding someone who takes old TVs isn’t that hard when you know where to look. Now you’ve got the knowledge to go out there and get rid of your old TV in the right way.